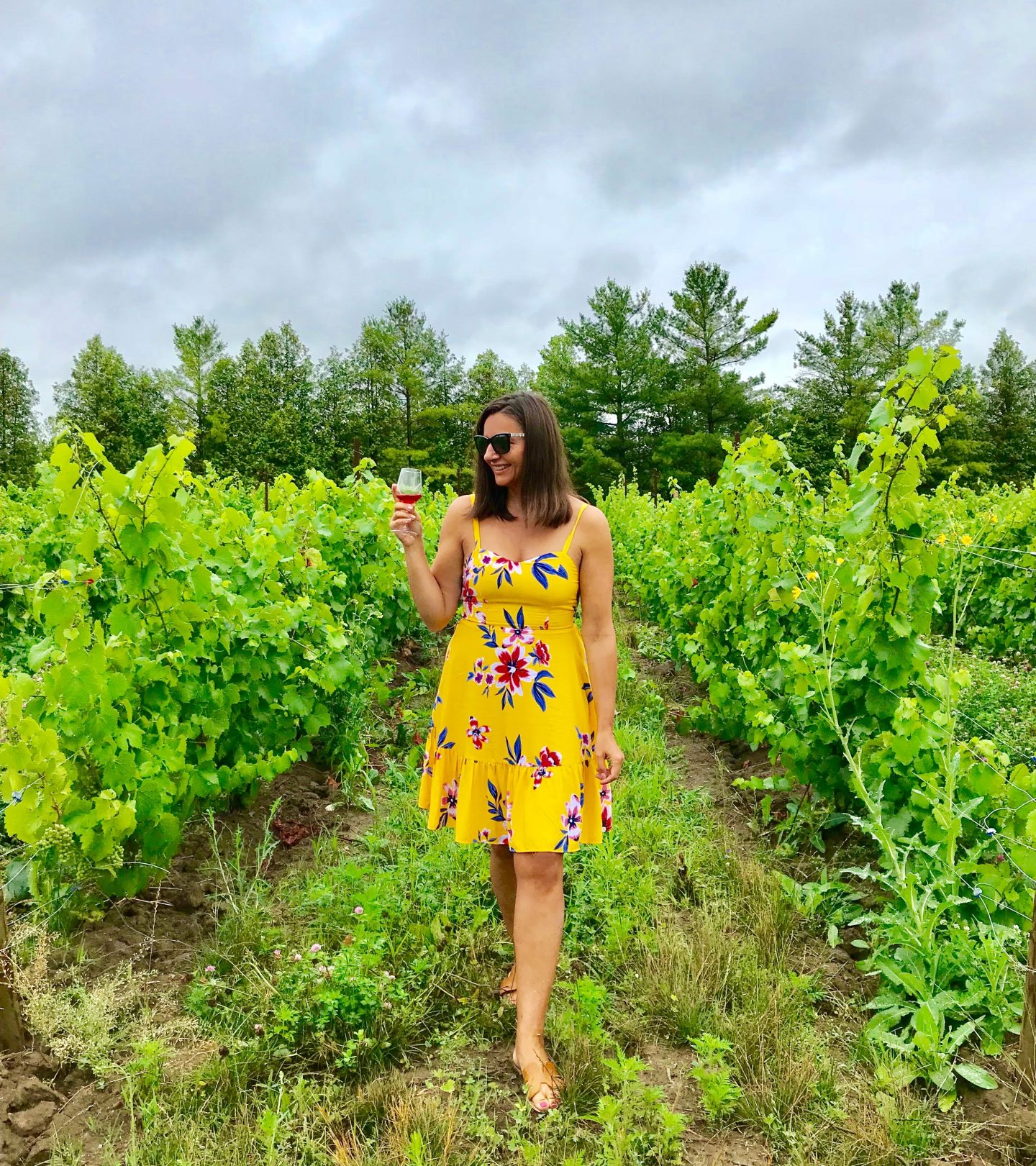 When you think of Ontario wine regions, you may not be the first place on the globe that springs to mind. However, the Canadian province is the country’s leading grape producer, home to over 17,000 acres of vineyards and responsible for approximately 85% of all Canadian wine production. After all, even the name Ontario means “sparkling water.”

Located at a “grape growing belt” latitude with similar conditions to France’s Bordeaux and the northern wine regions of California, Ontario’s lakes and rivers provide cooling breezes, while undulating landscapes aid snowmelt drainage and bathe the region in plenty of sunlight. The top grapes produced in Ontario are Vidal, Riesling, Chardonnay, and Cabernet Franc.

In fact, Ontario’s wines are considered a well-kept secret in the international wine world, especially when it comes to signature Icewines, though Canadians will be familiar with the province’s excellent wineries – around 1.6 million visitors come to Ontario annually just for wine tourism.

This guide to the wine regions of Ontario details the four key winegrowing regions in the province (the Niagara Escarpment, Niagara-on-the-Lake, Lake Erie North Shore and Prince Edward County) and a hand-picked selection of the best established wineries to visit in each one, as well as four emerging winegrowing regions, which are experiencing growth and ideal for visitation if you like to try what’s new and up-and-coming in the province’s wine scene.

The escarpment shelters the region from strong winds, ensuring that the climate is moderated by gentle and warm lake breezes, which result in an extended fall season, perfect for grape maturation.

Steep ridges of the benchlands and rolling hills are cut through by streams and tributaries, which provide groundwater as well as ample water drainage during spring melts.

The soils found around the Niagara Escarpment are diverse; clay- and silt-rich earth helps to hold in moisture, while sedimentary dolomites add a distinct minerality to wines produced in this region.

There are 53 wineries in Niagara Escarpment area. Some of the best are:

Ravine Vineyard – Located in St. Davids, Ontario where their wines are described as refined or elegant. Lydia Tomek is the Head Winemaker at Ravine Vineyard Estate Winery.

Domaine Queylus – The esteemed winery of Domaine Queylus is comprised of three estate vineyards in Beamsville and Jordan Bench, which make the most of the area’s terroir and microclimate. The complex small-lot wines produced here are noted for their finesse and minerality.

Flat Rock Cellars – The five-tiered winery of Flat Rock boasts 360-degree views out to Lake Ontario and the Toronto Skyline. The best wines to try here are the famous Chardonnay, Pinot Noir and Riesling varieties.

Leaning Post Wines – Leaning Post is a terroir-driven winery that focuses on small-scale, artisanal winemaking in unique plots of land across the Niagara region. Wines to try here include Riesling, Chardonnay, Pinot Noir and Syrah.

Niagara-on-the-Lake lies minutes from the border with the United States, just a short drive from Niagara Falls, and around 90 minutes from the Greater Toronto Area. The region is divided into four sub-appellations: Four Mile Creek, Niagara River, Niagara Lakeshore and St. David’s Bench.

The climate at Niagara-on-the-Lake is impacted by proximity to Lake Ontario’s deep waters and the Niagara River’s fast flow, both of which moderate temperatures and ensure a timely spring and long fall.

The region’s topography features gentle slopes that receive lots of sunlight, while soils with a high silt and clay content retain water well, plus the slopes help with drainage.

There are 39 wineries in the Niagara-on-the-Lake area, many of which were trailblazers in the earlier years of winegrowing in Onatrio. Some of the best are:

Chateau des Charmes – This winery, run by a fifth-generation French winegrower, was the first commercial vineyard in the whole of Canada to open to visitors. This winery is noted for high-quality wines, some of which are made using European vitis vinifera grapes. Chateau des Charmes also produces a famous Icewine.

Inniskillin Wines – This is the country’s original estate winery, which helped establish the modern Canadian wine industry, pioneering the VQA (Vintners Quality Alliance) system, and was also the first winery in Canada to receive a winery license after the end of prohibition. The table wines produced here are award-winning, but the Icewine is the one to try.

Jackson Triggs Estate Winery – Jackson Triggs is Canada’s most awarded winery, noted for its scale and technological approach to winemaking. The winery is best known for Chardonnay, Pinot Noir and Riesling.

Peller Estates Winery & Restaurant – The height of luxury when it comes to winemaking, the Peller Estates Winery has been in operation for over 50 years. There are two restaurants as well as an Icewine lounge on-site, which makes a visit here a fully immersive culinary experience.

Reif Estate Winery – One of the region’s founding wineries, the vineyards at Reif Estate only feature vitis vinifera grapes. The wines produced here are noted for their maturity, while the Vidal Icewine has won over 100 Gold Awards.

Prince Edward County is a Lake Ontario peninsula, located just a couple of hours away from Toronto. The climate here is moderated by westerly lake breezes, which keep temperatures cool during the warm summer months.

The landscape is made up of hills and valleys, with soils that feature clay, sand and limestone. The stony surfaces allow for good drainage, heat retention and root penetration – all of which is ideal for thriving vines.

Early plantings focused on vitis vinifera varieties of grapes, such as Chardonnay and Pinot Noir, but now the region is developing and experimenting with other varieties, to discover what is best for the terroir. Prince Edward wines are renowned for their minerality and acidity.

There are 20 wineries in Prince Edward County. Some of the best are:

Closson Chase – Known for Chardonnay, Pinot Noir and Pinot Gris grapes, which are used in wines made using European traditions and modern viticulture techniques for sustainability.

Ontario’s southernmost winemaking region, Lake Erie North Shore (often abbreviated to LENS) is located a few hours’ drive from the Greater Toronto Area, a stone’s throw from the border with the United States.

Being more southern, Lake Erie North Shore benefits from an extended vine growing season, usually with lots of sunlight, ending with early harvests in August, up until late-harvest varieties being picked towards the end of October. As such, some of the country’s finest wines are produced here.

The region’s topography also greatly contributes to the excellent winegrowing conditions, as this appellation is almost entirely surrounded by water: Lake St. Claire, the Detroit River, as well as Lake Erie and its nine island.

Southwest lake breezes and the landscape’s gentle slopes help to balance the climate and provide the region with appropriate drainage.

There are 13 wineries at Lake Erie North Shore. Some of the best are:

Colio Estate Wines – One of Ontario’s first established wineries, Colio was originally founded by a team of three Italian bricklayers! Colio produces a number of estate and limited edition wines, including blends, Icewines and sparkling wines. The Girls’ Night Out product line has won multiple awards.

Viewpointe Estate Winery – As you may guess from the name, Viewpointe is famous for its epic panoramas as much as its wines. The vineyards here produce Auxerrois, Cabernet Franc, Chardonnay Pinot Grigo, Pinot Noir, Riesling and Syrah.

Ontario’s viticulture scene is constantly innovating and expanding, including the emergence of new winegrowing regions that are gaining more and more interest outside of the above four wine regions.

Several wineries have been established just north of Toronto, offering visitors and residents of the city a convenient day or weekend trip to local vineyards.

Situated close to Niagara and the Lake Erie North Shore winegrowing regions, Norfolk has a rising wine scene that is generating a lot of buzz.

The two wineries to try here are the Burning Kiln Winery and the Smoke & Gamble – Frisky Beaver, the latter of which is located in the pretty lakeside town of Port Dover.

Georgian Bay has long been famous for its picturesque landscapes, filled with magnificent viewpoints that look out over the green rolling hills and out to the bay. Now, the region is enjoying an up-and-coming wine scene, and the wineries to visit here can be combined with a trip to the bay, Bruce Peninsula and lovely beaches.

The trio of wineries to check out at Georgian Bay is comprised of Coffin Ridge Boutique Winery, Georgian Hills Vineyards and The Roost Wine Co.

In recent years, a number of new wineries have popped up along the shores of Lake Huron, which was already a getaway spot on the map for beaches, a thriving food scene and cultural attractions.

Although Canada’s wine regions may not be as famous as those of France and Italy, we hope that this guide to the wine regions of Ontario has opened your eyes to the area’s young viticulture scene, from decades-old wineries that pioneered the way and helped establish the winegrowing industry here, to emerging wineries bringing something new to the table.

Let us know your thoughts on Ontario’s wine scene and please provide any recommendations for wines to try, wineries to visit, or vino-focused Canadian attractions you would suggest next.