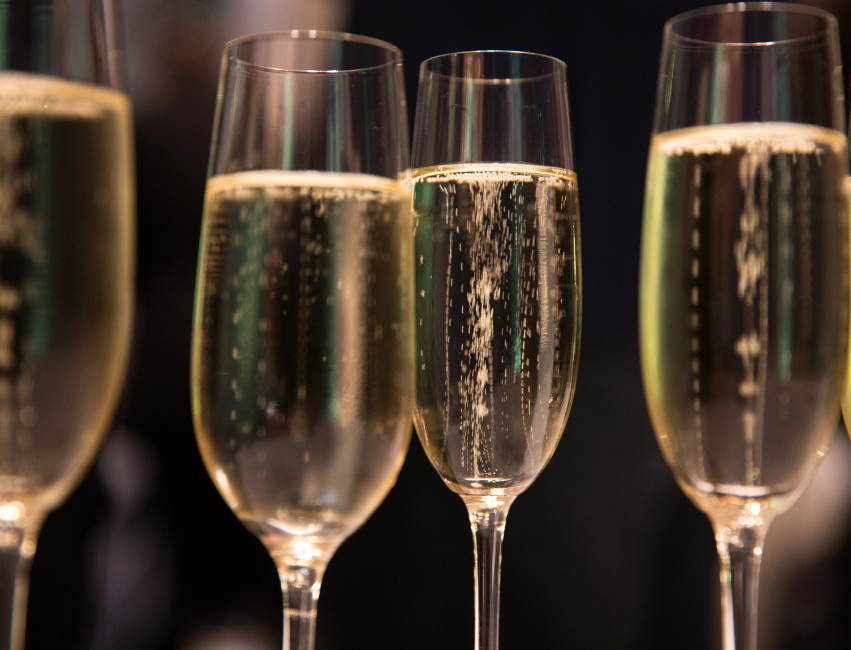 What is Prosecco? One of Italy’s most famous drinks, bubbly Prosecco wine has become popular and accessible all over the world. You’ve likely tried a glass of sparkling wine already, but do you know what makes Prosecco so special, and what makes for a good quality bottle?

This “Prosecco 101” guide breaks down everything you need to know about Prosecco: where it comes from, where it’s made, which grapes are used, the preferred method of production, the difference between DOC and DOCG, food pairings and serving suggestions, flavor profiles and sweetness levels, how Prosecco differs to its famous French cousin Champagne, as well as what to look for when selecting a bottle of Prosecco.

This Prosecco post may contain affiliate links. Purchasing through these links earns us a commission at no extra charge to you. Thank you.

Prosecco is a sparkling white wine from the Valdobbiadene region of Veneto, Italy. The wine is made with Glera (Prosecco) grapes and produced using the Charmat sparkling winemaking method.

Although Veneto has centuries of history in making early versions of Prosecco, chemist Antonio Carpané is credited with producing the first bottle of sparkling Prosecco in 1868. He was convinced that wine as good as Champagne could be produced in Italy (and he was right!).

What Grape Is Prosecco Made From?

Prosecco is made from the Glera grape, which was previously also called the Prosecco grape. This highly aromatic green grape has grown in northern Italy’s Veneto and Friuli regions for centuries.

In Italy, true Prosecco must be made with at least 85% Glera grapes. The other 15% can be a blend of Verdiso, Bianchetta Trevigiana, Perera, Chardonnay, Pinot Bianco, Pinot Grigio, or Pinot Noir (vinified white) grapes.

The Glera grape has a thin skin, moderately high acidity (perfect for sparkling wine) and typically produces a high yield, which means the wine is more neutral. Glera wines are usually light to medium-bodied, with alcohol levels ranging from 8.5% to 12.5% for fully dry wines. Aromas include melon, peach, pear, honey and white flowers.

As of 2020, a new rosè type of Prosecco has been approved for production, which must be made using a blend of Glera and Pinot Noir grapes, and is only applicable for DOC.

How is Prosecco made?

Prosecco is made using the Charmat Method, also known as the Italian Method or Tank Method, named for Eugène Charmat, who patented a developed version of the method in 1907.

Once grapes are harvested, they are transported to a winery to be gently pressed, so that only free-run juice from the heart of the grape is extracted. Approximately 100 kilograms of grapes produce 70 liters of wine. This must (cloudy juice) is left to settle in stainless steel tanks at a temperature between 5 and 10 degrees Celsius for between 10 and 12 hours.

When the cloudy part of the must has settled, natural yeast is added for fermentation, which encourages the natural sugars in the juice to convert to alcohol. This fermentation process usually takes between 15 and 20 days, and the tanks are kept at a temperature between 18 and 20 degrees Celsius.

Next, sugar and yeast are added to the base wine, then the mixture is put into a stainless steel pressure tanks for a secondary fermentation. The yeast consumes the sugar and as it ferments, carbon dioxide is released. The gas has nowhere to go, so the container becomes pressurized, which carbonates the wine and produces the signature bubbles.

The longer the wine is in the tank, the more aromas are preserved and the finer and more durable the bubbles are. As this takes up more time, the bottles become more expensive, with Charmat Lungo (up to nine months) being higher quality Prosecco. However, in general, the tank method is very efficient, which is why Prosecco can be very affordable, and a lot cheaper than Champagne.

Once the wine has reached the desired alcohol level, the wine is cooled and filtered so that all the yeast used in fermentation is removed. Some residual sugar is kept to provide sweetness, then the Prosecco is bottled under pressure, in order to retain the bubbles. The whole secondary fermentation process takes a minimum of 30 days.

Where is Prosecco Made?

Prosecco is made in northeastern Italy, in nine provinces located in the Veneto and Friuli Venezia Giulia regions. It’s named after the former village of Prosecco, which is now a suburb of Trieste.

The best vineyards are located in the hills around Asolani and Valdobbiadene, and the Conegliano-Valdobbiandene region is famous for its lush rolling hills of vineyards. The generous rainfall and southern facing slopes with good drainage and gentle winds support ideal conditions for grape-growing.

There are three categories of Prosecco quality – DOC (controlled designation of origin), DOCG (denomination of controlled and guaranteed origin) and Superiore – which also relate to where the wines are produced. Glera grapes made in a Prosecco style outside of the DOC and DOCG designated areas cannot be called Prosecco.

This is basic Prosecco, produced all over northeast Italy, and is usually of a more common quality and cheaper than DOCG. Prosecco Trieste DOC and Prosecco Treviso DOC are two regional designations that represent basic Prosecco.

Prosecco DOCG is assigned only to areas with high-quality soil, steep hills with ample drainage that are hit by sunlight in the right way, perfect ventilation provided by the shape of the hills, plus manual harvest that filters out rotten berries.

Valdobbiadene Superiore di Cartizze DOCG is one of the smallest wine regions in the world, covering only 264 acres. Located outside the town of Valdobbiadene, Cartizze has low production, but its rare wines are highly acclaimed and considered to be of the highest quality – the “Grand Cru” of Prosecco.

Asolo Prosecco DOCG isn’t as well-known as Cartizze, but the hilly topography produces excellent Glera grapes. This is also the only region that allows for the “Extra Brut” style.

What Foods Should I Pair with Prosecco?

Prosecco is versatile and pairs well with a wide variety of different foods, such as cured meats, strong cheeses, fish, and Asian cuisines, particularly Southeast Asian cuisines, such as Thai, Vietnamese and Singaporean, as well as Cantonese. This is because Prosecco is a great palate cleanser to drink with medium-intensity foods such as chicken, shrimp, pork, or tofu; while the sweet aromas and the bubbles match well with spice.

It’s also typically drank on its own as well. In Italy, Prosecco is a ubiquitous drink, though internationally it is usually drank as an aperitif (before food).

Prosecco can also be used as an ingredient in cocktails. Some of the most famous Prosecco cocktails are:

What Temperature Should Prosecco be served at?

Prosecco should be serve chilled between 6 and 10 degrees. Keep Prosecco in the fridge until ready to serve then it can be placed in an ice bucket filled with ice and water to keep it chilled.

What Glass do you use for Prosecco?

The taste of Prosecco or any wine for that matter can be greatly affected by the shape of the glass! Prosecco should be served in a tulip-shaped glass.

The tall and slender tulip shape helps preserve the finesse of the bubbles, while the larger bulb at the top helps to collect the wine’s floral aromas. I love the coupe glasses but they are not great for sparkling wine as the bubbles will disperse quickly.

How Long Can Prosecco Last in the Fridge Opened?

Use a hermetic stopper cork (an airtight cork) to seal the Prosecco bottle immediately after you open it. These corks are available at most wine stores and on Amazon. Once opened, Prosecco should be consumed within three days, but champagne and English sparkling wines have slightly longer lives

Typical Prosecco aromas include green apple, honeydew, pear, lager and cream. The taste profile is dry and light-bodied, with no tannins and a medium-high acidity ranging between 11.5% and 13.5% ABV.

There are three levels of perlage (fizz) to a Prosecco:

The majority of Prosecco wines are produced in a dry brut style, but the sweet, fruity flavors of the Glera grape (green apple, melon, honeydew, pear etc.) can make the wine seem sweeter than it actually is.

How is Prosecco Different to Champagne?

Champagne is a sparkling wine from Champagne, France and differs from Prosecco in history, production and price. Champagne was first produced by Dom Perignon in 1693, which means it predates Prosecco by 175 years.

The Champagne region of France lies around 130 kilometers (80 miles) northeast of the capital city, Paris. This wine is made using Chardonnay, Pinot Noir and Pinot Meunier grapes, and produced using the “traditional” or “classic” method.

Also known as Méthode Champenoise, the classic method of sparkling wine production starts with a base wine of barely ripe grapes, selected to preserve high acidity.

Sugar and yeast is added in the “liqueur de tirage” stage; this step is unique to sparkling wines. The yeast consumes the sugar, which releases carbon dioxide. As this takes place in a closed container and as the carbon dioxide has nowhere to go, it pressurizes the container and carbonates the wine.

A second fermentation takes place in 750ml bottles, then the bottle is aged on “lees” (flecks of dead yeast leftover in a bottle, barrel, or tank of fermented wine). If a wine is aged “on the lees” (sur lees) this means that the taste will be richer on the mid-palate. Aging on the lees in a technique typical in both white and sparkling wines.

The bottle neck is plunged into frozen brine or liquid nitrogen, so when the cap is taken off during dosage, an ice cube of lees can be removed, leaving only clear sparkling wine left in the bottle.

After disgorgement, a little wine and sugar is added to the mix, both for flavor and to fill the empty part of the bottle. This is called dosage or liqueur d’expédition.

This Méthode Champenoise is more time-intensive and costly than the Charmat Method used for making Prosecco, and it also produces smaller and longer-lasting bubbles.

However, Prosecco is not just “cheap Champagne” but just a different product; using aromatic Glera grapes and allowing aromatics to prevail in steel tanks produces a fruitier wine than Champagne.

What Should I Look for When Buying Prosecco?

First, ensure your Prosecco is a product of Italy, as outside of the country plenty of international winemakers are using the name “Prosecco” but it is not true Prosecco. Next, read the label and look for the DOC or DOCG, as well as the names Valdobbiadene and Conegliano. Also, check that the wine is made using the Glera grape (at least 85%).

Unfortunately, Prosecco is one of the most falsified wines in the world, so these markers are the best way to ensure quality and authenticity. A decent bottle of Prosecco should cost around USD20 and it’s best to buy from a specialist wine shop to be able to speak to trained, qualified staff about what you’re looking for.

More Things to Know About Prosecco

Does this guide to Proseccio have you craving a glass of bubbly? We hope this informative guide to Italia’s most famous sparkling wine has helped educate you on this delicious drink and transported you to northeastern Italy through your palate.

If you found this article helpful, if you’re fan of Prosecco and have some tips on drinking or recommendations of great labels, or if you’ve visited northeastern Italy, let us know in the comments below.